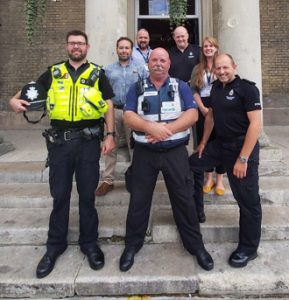 Venture Security has become the first to be accredited by Wiltshire Police under the Community Safety Accreditation Scheme (CSAS). As elsewhere in England and Wales, this gives security officers low level police powers, typically to help tackle anti-social behaviour.

In response to a rise in low level anti-social behaviour across the city, since July 2017 Salisbury City Council has contracted Venture to provide SIA-badged City Centre Security Officers (CCSOs). The aim; to assist the police in dealing with such behaviour.

Hence Venture with the support of SCC and Wiltshire Police, applied for and has been granted extra powers by Wiltshire Chief Constable, to further assist SCC in dealing with anti-social behaviour.

Venture’s CCSOs now patrol the city with greater powers to deal with, typically, begging and under-18 street drinking, as part of their role with Wiltshire Police. These powers are already held by Venture in Hampshire.

Community Policing Team Insp Pete Sparrow said: “We fully support this change to the CCSO’s role and responsibility and as has been proven over the last two years, the presence of the CCSO’s has made a significant difference in our efforts to curb low level criminality and ASB. Our officers regularly liaise with the CCSO’s and patrol with them and this activity will not change.”

Sven Hocking said: “Today marks another important step in the relationship between Salisbury City Council, Venture Security and Wiltshire Police with the delegation of Community Safety Accreditation Scheme powers by the police to the CCSO’s. These additional powers will enable closer partnership working and additional evidence gathering capabilities, which will increase the capacity to further reduce anti-social behaviour issues in the city”.

Paul Howe, Managing Director at Venture said: “It is a genuine honour to be the first organisation to have been approved by Wiltshire Police under CSAS. This is something that we have been working towards for a very long time and we really appreciate the support we have received both from Wiltshire Police and Salisbury City Council on this project. Our officers have already made a big difference in Salisbury over the past two years and CSAS will enable them to be even more effective in dealing with antisocial behaviour on the street.”

The new powers given to the CSAS-accredited security officers, include:

CSAS is a voluntary scheme, whereby chief constables can give individuals involved in community safety, low level police powers. The aim of the scheme is to help maintain and improve community safety, by reducing levels of crime and anti-social behaviour. To achieve CSAS accreditation the team from Venture worked with Wiltshire Police. The process included vetting and assessment, with staff being police screened and completing practical and classroom-based training.