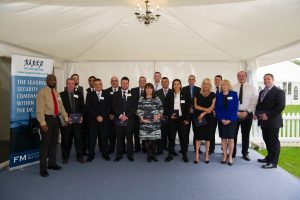 The fourth ACS Pacesetters Achievements Awards Lunch took place on 24th May at Royal Windsor Racecourse with almost 200 members, their staff and guests in attendance.

Due to the aftermath of the Manchester Arena bombing just 2 days before, some of the members were unfortunately unable to attend to collect their awards and a one minute silence was held prior to lunch to remember the victims of the terror attack.

This annual lunch, run by FM Contract Watch, is a recognised event in the security guarding calendar.  Each member company attending was presented with a 2017 ACS Pacesetters Award to recognise the fact that they have achieved an SIA ACS score in the top 15% of all accredited companies. However; the highlight of the day was the Security Officer of Distinction Awards which were presented to Security Officers who had excelled in their duties and, at times, risked their own safety to save others.  The standard of nomination this year was exceptional and it was a very difficult task to reach the final winners. The Security Officers had gone above and beyond what was expected, saving lives, helping in the conviction of criminals and being injured themselves in the line of duty. All the winners were of great credit to their company and the client that they are contracted to. It was an honour to be able to recognise their heroic actions.

The 2017 Security Officer of Distinction Award winners were:

The guest speaker, Chas Staines, Director of Continuancy Limited gave an interesting insight into the challenges of security as the Global Risk and Security Manager of an international high value jewellery company.  Chas also presented the individual awards to the Security Officers.

We would like to take this opportunity to thank our generous main sponsors, without whom we would be able to run this event, and they were:  Broadstone Engage, Cobia, Eurotech Monitoring, NSI, Sutton Specialist Risks and Ward Security.  TC Security and First Response Group sponsored the lunchtime drinks.

It was also an opportunity to raise funds for charity and this year the chosen charity was Thames Valley Air Ambulance.  We were pleased to raise £1,100.00 by way of a raffle for this very worthwhile cause. Thanks go to the organisations who donated the prizes: The Oxfordshire Golf Club, Just in Time First Aid Training, Royal Windsor Racecourse, FM Contract Watch and Westgrove Support Services.